If someone asked me to describe Google Code-In with one word, I would definitely say “amazing”. And that’s not just a common word: that’s what this contest really makes me feel.
I. Am. Amazed.
To begin with, I learned about GCI by chance in a few days after its start. After registration and completing my beginner tasks, I was scrolling through the enormous task list choosing the one for me when I suddenly read “KDE”.
I did not know that my favorite community is a participating organization. So I revised my knowledge of Qt, prepared my programming tools and… opened Inkscape! Most of the tasks I completed in Google Code-In are design tasks. I designed a bunch of logo variants for KDE neon and a leaflet for Plasma, helped updating application screenshots on kde.org, but what I am really proud of is redesigning 16 (!) activity icons for GCompris. 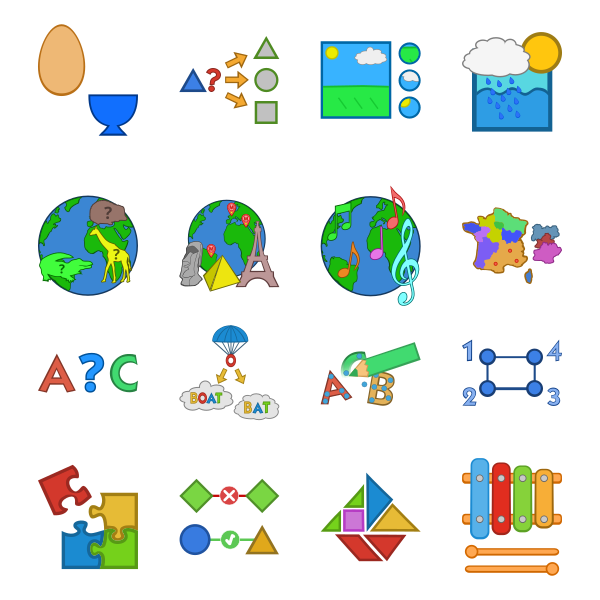 I now work on 6 more icons, and it feels like creating an icon pack  🙂
Such focus on design is not accidental: in my opinion, core functionality in open source projects is usually already quite polished due to many developers contributing to it, while design, considered “unimportant”, often lacks. This is not the case of KDE, which is yet another reason for admiration; but I think there are still things to improve, and so I do  😀
On the programming side, I helped fixing some Clazy warnings in Dolphin. The perfectionism that is found in every line of code, every guideline and in people’s attitude made me reevaluate the amount of effort put in the software I use every day.
I was going to help KDE community, and I found KDE helping me  🙂
During the contest, I learned to use IRC, Phabricator, Git Review Board, Cmake and Clazy. Also, my vector drawing skills have greatly improved. I even learned French regions!..  🙂 This led me to understanding that the word “student”, so commonly used in GCI, does not mean “highschool student”: it means “Google Code-In student”, and I am proud of being one.
I still have about a week, and I hope to help as many KDE projects as possible, meet new people and prove the world that software can be beautiful! And no matter if I win the contest or not, my KDE journey does not end there.
Thank you, KDE!